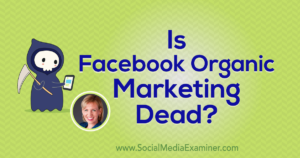 Here is my synopsis of Michael Stelzner’s interview with Mari Smith.

News from our Blog

Updated Statistics on 17 Marketing Strategies
This article title is a little mis-leading. Don\'t pass it by if you are an established business. In fact, it may be more important to an established business. Over time we can get into a marketing rut...
Customer Reviews
Customer reviews are becoming more important on social media platforms. It isn\'t just Yelp for restaurants! I started my research for a new dentist at Yelp last weekend. More and more of my retail cli...
Expert
How does your prospect or client KNOW that you are the expert they\'re looking for? \r\n#1 Reviews on your website plus social media platforms. \r\n#2 Information on your website. Show your credentials, ...
How to Write an Effective Holiday Marketing Email
\r\nHere is a very well written article from Constant Contact with step-by-step instructions for creating your holiday marketing campaign. Call me if you would like to brainstorm and work on your ideas....
New from Constant Contact
Constant Contact is a long time favorite of mine for email marketing. I like their interface. I like their Knowledge Base. I LOVE their live tech support.\r\nNow they are expanding to become a broader d...
Writing Effective Follow Up Emails
Thank you, Houzz, for a look at a rarely discussed type of communication - follow up emails to prospects. The author gives some very good ideas of how to contact prospects and maintain their interest ...
Google Business Page
Your Google Business Page listing has gained in importance. Do a search for your business. Look at the Google Business Listing on the right side of the page. Is the info accurate? Is the info complete...
How to Use Facebook to Drive More Traffic to Your Blog
This article does a really nice job of outlining how to use FB posts to drive traffic to your website. They are talking about blogs specifically but the same principles work to drive traffic to any pa...
3 Facebook Ad Types That Improve Sales
Depending on your goal(s) for your Facebook ad, here are 3 ad layouts that can help you gain prospects or sales. It\'s important to try new things on Facebook and to do some original ideas to grab read...
Reviews
Speaking of client reviews - Make it easy for people to give you a review. Put icons/links to review sites on your Home Page. Put icons/links in your email template. Put them in your email signature. ...